Reason why British left India in 1947 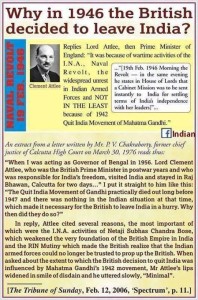 Writing in his much-acclaimed book Indian Struggle, Subhas Chandra Bose stated, “Mahatma Gandhi has rendered and will continue to render phenomenal service to his country.” “But”, he added, “India’s salvation will not be achieved under his leadership.”

Nearly 70 years after power was transferred to Indian hands, sufficient information has come on record to give a new thrust to the old question: “Who brought India freedom — Gandhi or Bose?”

The people who were best positioned to answer the question were those who had an inside knowledge of the situation as it prevailed in India from 1942 to 1947. In 1942, Gandhi launched the Quit India movement. The view from the Bose’s side was that it was his suggestion in 1939 to serve a 6-month’s ultimatum on the British Government, which was accepted by Gandhi in totality in his Quit India resolution of August 1942. Prior to this, Gandhi was, as Bose himself stated repeatedly, most reluctant to launch a movement. This is what he wrote in Indian Struggle.

“On 6 September(1939), Mahatma Gandhi, after meeting the Viceroy, Lord Linlithgow, issued a press statement saying that in spite of the differences between India and Britain on the question of Indian independence, India should cooperate with Britain in her hour of danger. This statement came as a bombshell to the Indian people, who since 1927 had been taught by the Congress leaders to regard the next war as a unique opportunity for winning freedom.”

Be that as it may, the Quit India movement was launched in good earnest. Bose praised Gandhi’s stirring speech as he launched it. But, unfortunately, the movement was “crushed within 3 weeks”. Thus spake Khushwant Singh, someone who was not a fan of Subhas Bose. Anyhow, having lived through those times, Singh further explained: “The British were not evicted from India; they found it increasingly difficult to rule it and decided to call it a day.”

So what happened between 1942 and 1947 that made the British take the call? Conventional wisdom can be explained by way of 1954 Bollywood hit “दे दी हमें आज़ादी बिना खडग बिना ढाल/साबरमती के संत तू ने कर दिया कमाल”, which extols Gandhi for having singlehandedly delivered freedom to India solely through the non-violent means. Celebrated historians and researchers with all their experience and exposure (which doesn’t come easily to those who go against the current) can put it better

There is a ground rule in journalism — and also in intelligence — that if 3 informed reliable sources independent of each other make similar statements, the sum of their statements has to as close to truth as one gets it.

So let’s try and connect some dots and see what story they tell.

As late as 1946, Gandhi stated, “We shall be able to win freedom only through the principles the Congress has adopted for the past 30 years.” Gandhi’s own three pet principles were “truth, ahimsa and brahmacharya”. The first 2 are well-espoused by Gandhians, who rather not speak about the third for it is a blot on the Gandhian legacy.

No one knew India’s internal situation better than the Director, Intelligence Bureau. One who thinks it’s the editor of some newspaper is superficial. Here’s what Sir Norman Smith, DIB, noted in a secret report of November 1945 that was declassified in the 1970s: “The situation in respect of the Indian National Army is one which warrants disquiet. There has seldom been a matter which has attracted so much Indian public interest and, it is safe to say, sympathy… the threat to the security of the Indian Army is one which it would be unwise to ignore.”

An agreement of sort came from Lt General SK Sinha, former Governor of Jammu & Kashmir and Assam, who was one of the only 3 Indian officers posted in the Directorate of Military Operations in New Delhi in 1946. “There was considerable sympathy for the INA within the Army… It is true that fears of another 1857 had begun to haunt the British in 1946.” Sinha wrote this in 1976.

Agreeing with this contention were a number of British MPs who met British Prime Minister Clement Attlee in February 1946. “There are two alternative ways of meeting this common desire (a) that we should arrange to get out, (b) that we should wait to be driven out. In regard to (b), the loyalty of the Indian Army is open to question; the INA have become national heroes….” This minute too was declassified in the 1970s.

A most valuable light on the role of the INA was thrown by Bhimrao Ambedkar in February 1956, a few months before he passed away, in a tell-all interview to the BBC. “I don’t know how Mr Attlee suddenly agreed to give India independence… It seems to me from my own analysis that two things led the Labour party to take this decision: 1. The national army that was raised by Subhas Chandra Bose. The British had been ruling the country in the firm belief that whatever may happen in the country or whatever the politicians do, they will never be able to change the loyalty of soldiers. That was one prop on which they were carrying on the administration. And that was completely dashed to pieces.”

The clincher of an argument came from Earl Attlee himself as he visited India in October 1956. Some 2 decades later, PB Chakravarty, Chief Justice of Calcutta High Court and acting Governor of West Bengal in 1956, recalled his talks with the former British PM in the following words: “Toward the end of our discussion I asked Attlee what was the extent of Gandhi’s influence upon the British decision to quit India. Hearing this question, Attlee’s lips became twisted in a sarcastic smile as he slowly chewed out the word, ‘m-i-n-i-m-a-l!”

British historian Michael Edwardes fairly summed this up in his 1964 book, The Last Years of British India. “It slowly dawned upon the Government of India that the backbone of the British rule, the Indian Army, might now no longer be trustworthy. The ghost of Subhas Bose, like Hamlet’s father, walked the battlements of the Red Fort (where the INA soldiers were being tried), and his suddenly amplified figure overawed the conference that was to lead to Independence.”

It is a wide known fact that Bose met Hitler during WW-2 & had the german support against the Brits. He also met many Indian POWs in German ccamps & motivated them to fight for independance against the Imperialist British.

The crucial point to note is that thanks to Subhas Chandra Bose’s activities, the Indian Armed Forces began to see themselves as defenders of India rather than of the British Empire. This, more than anything else, was what led to India’s freedom. This is also the reason why the British Empire disappeared from the face of the earth within an astonishingly short space of twenty years. Indian soldiers, who were the main prop of the Empire, were no longer willing to fight for the British. What influenced the British decision was mutiny of the Indian Navy following the INA trials in 1946. While the British wanted to try Subhas Chandra Bose’s INA as traitors, Indian soldiers saw them as nationalists and patriots. This scared the British. They decided to get out in a hurry.

(Attlee repeated his argument on at least two other occasions, including once in the House of Commons. During a debate in the House of Commons, he told Churchill that he would agree to the latter’s suggestion of holding on to India if he could guarantee the loyalty of the Indian armed forces. Churchill had no reply. The Labour Prime Minister was as much an imperialist as Churchill, but more pragmatic, prepared to see the writing on the wall.)

This will come as a shock to most Indians brought up to believe that the Congress movement driven by the ‘spiritual force’ of Mahatma Gandhi forced the British to leave India. But both evidence and the logic of history are against this beautiful but childish fantasy. It was the fear of mutiny by the Indian armed forces – and not any ‘spiritual force’ – that forced the issue of freedom. The British saw that the sooner they left the better for themselves, for, at the end of the war, India had some three million men under arms. One would have to be extraordinarily dense – which the British were not – to fail to see the writing on the wall.

So, as the great historian R.C. Majumdar wrote, Subhas Bose with his INA campaigns probably contributed more to Indian independence than Gandhi, Nehru and their movements. The result of Subhas Chandra Bose’s activities was the rise of the nationalist spirit in the Indian Armed Forces. This is the reason why Nehru, after he became Prime Minister, did everything possible to turn Bose into a non-person. He wanted no rivals.

As Jawaharlal Nehru delivered his famous “Tryst with destiny” speech, not a word in it was devoted to Bose or his INA, but without whom the transfer of power wouldn’t have taken place in 1947.