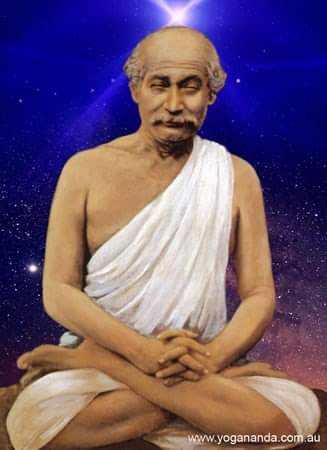 Lahiri Mahasaya had a very famous friend, Swami Trailanga, who was reputed to be over three hundred years old. The two yogis often sat together in meditation. Trailanga’s fame is so widespread that few Hindus would deny the possibility of truth in any story of his astounding miracles. If Christ returned to earth and walked the streets of New York, displaying his divine powers, it would cause the same excitement that was created by Trailanga decades ago as he passed through the crowded lanes of Benares.

On many occasions the swami was seen to drink, with no ill effect, the most deadly poisons. Thousands of people, including a few who are still living, have seen Trailanga floating on the Ganges. For days together he would sit on top of the water, or remain hidden for very long periods under the waves. A common sight at the Benares bathing GHATS was the swami’s motionless body on the blistering stone slabs, wholly exposed to the merciless Indian sun. By these feats Trailanga sought to teach men that a yogi’s life does not depend upon oxygen or ordinary conditions and precautions. Whether he were above water or under it, and whether or not his body lay exposed to the fierce solar rays, the master proved that he lived by divine consciousness: death could not touch him.

The yogi was great not only spiritually, but physically. His weight exceeded three hundred pounds: a pound for each year of his life! As he ate very seldom, the mystery is increased. A master, however, easily ignores all usual rules of health, when he desires to do so for some special reason, often a subtle one known only to himself. Great saints who have awakened from the cosmic mayic dream and realized this world as an idea in the Divine Mind, can do as they wish with the body, knowing it to be only a manipulatable form of condensed or frozen energy. Though physical scientists now understand that matter is nothing but congealed energy, fully-illumined masters have long passed from theory to practice in the field of matter control.

The great yogi preserved a habitual silence. In spite of his round face and huge, barrel-like stomach, Trailanga ate only occasionally. After weeks without food, he would break his fast with potfuls of clabbered milk offered to him by devotees.

On one occasion her master Trailanga, forsaking his usual silence, honored Lahiri Mahasaya very pointedly in public. A Benares disciple objected…Sir.. he said..why do you, a swami and a renunciate, show such respect to a householder?..
My son… Trailanga replied..Lahiri Mahasaya is like a divine kitten, remaining wherever the Cosmic Mother has placed him. While dutifully playing the part of a worldly man, he has received that perfect self-realization for which I have renounced even my loincloth!

From – Autobiography of a Yogi, Chapter 31

Comments Off on A tale of 2 Masters !!