Posted on 4th August 2015 | Comments Off on Martial Arts 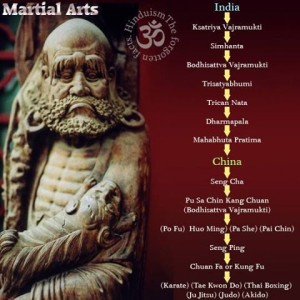 Martial Arts
According to author Terence Dukes:
“Fighting without weapons was a specialty of the Ksatreya (caste of Ancient India)and foot soldier alike. For the Ksatreya it was simply part and parcel of their all around training, but for the lowly peasant it was essential. We read in the Vedas of men unable to afford armor who bound their heads with turbans called Usnisa to protect themselves from sword and axe blows.
Search for Kalari Martial Arts and Silambam Martial Arts.
Fighting on foot for a Ksatreya was necessary in case he was unseated from his chariot or horse and found himself without weapons.
Although the high ethical code of the Ksatreya forbid anyone but another Ksatreya from attacking him, doubtless such morals were not always observed, and when faced with an unscrupulous opponent, the Ksatreya needed to be able to defend himself, and developed, therefore, a very effective form of hand-to-hand combat that combined techniques of wrestling, throws, and hand strikes.
Tactics and evasion were formulated that were later passed on to successive generations. This skill was called Vajramukhti, a name meaning “thunderbolt closed – or clasped – hands.”
The tile Vajramukti referred to the usage of the hands in a manner as powerful as the Vajra maces of traditional warfare. Vajramukti was practiced in peacetime by means of regular physical training sessions and these utilized sequences of attack and defense technically termed in Sanskrit nata.”
“Prior to and during the life of the Buddha various principles were embodied within the warrior caste known as the Ksatreya (Japanese: Setsuri). This title – stemming from Sanskrit root Ksetr meaning “power,” described an elite force of usually royal or noble-born warriors who were trained from infancy in a wide variety of military and martial arts, both armed and unarmed.
In China, the Ksatreya were considered to have descended from the deity Ping Wang (Japanese: Byo O), the “Lord of those who keep things calm.” Ksatreyas were like the Peace force – to keep kings and people in order. Military commanders were called Senani – a name reminiscent of the Japanese term Sensei which describes a similar status. The Japanese samurai also had similar traits to the Ksatreya. Their battle practices and techniques are often so close to that of the Ksatreya that we must assume the former came from India perhaps via China. The traditions of sacred Swords, of honorable self-sacrifice, and service to one’s Lord are all found first in India.
“In ancient Hinduism, nata was acknowledged as a spiritual study and conferred as a ruling deity, Nataraja, representing the awakening of wisdom through physical and mental concentration. However, after the Muslim invasion of India and its brutal destruction of Buddhist and Hindu culture and religion, the Ksatreya art of nata was dispersed and many of its teachers slain. This indigenous martial arts, under the name of Kalari or Kalaripayit exists only in South India today. Originating at least 1,300 years ago, India’s Kalaripayit is the oldest martial art taught today. It is also the most potentially violent, because students advance from unarmed combat to the use of swords, sharpened flexible metal lashes, and peculiar three-bladed daggers.
When Buddhism came to influence India (circa 500 B.c), the Deity Nataraja was converted to become one of the four protectors of Buddhism, and was renamed Nar (y)ayana Deva (Chinese: Na Lo Yen Tien). He is said to be a protector of the Eastern Hemisphere of the mandala.”

(source: The Boddhisattva Warriors: The Origin, Inner Philosophy, History and Symbolism of the Buddhist Martial Art Within India and China p.3 – 158-174 and 242).