Vedic Past of Pre-Islamic Arabia – Part 2

In 570 AD, the year of Mohammad’s birth, Arabia was a thriving, rich and varied Vedic culture. Although monotheism in the forms of Christianity and Judaism were known to the people of Arvasthan, they were undeterred in their uncompromising faith to the religion of their ancestors: Hinduism . Every household had an idol of a Hindu god or goddess. There were hundreds of sacred groves, places of pilgrimage, and temples which were sanctuaries containing images of the entire range of Vedic gods. The temples in addition to being the religious focus of the Arabs, were also the cultural centres of learning. It was the temples that were the venues of literary and poetry competitions, of glorious festivals.

The virtues most highly prized by people of Arvasthan were bravery in battle, patience in misfortune, loyalty to one’s tribe, and generosity to the needy and the poor. They proudly upheld the value of tolerance in matters of religious practice and belief. The respect they showed towards other people’s religions was fully in keeping with their Vedic spiritual tradition.

The status of women was that of pride and equal respect. How could it be otherwise with a people whose chief deity was the goddess Durga (Alla). Women married men of their choice and were financially independent. They were entrepeneurs, artisans, poets and even warriors! Later on Muhammad would marry Khadija, who was not only a wealthy merchant but also in the position to choose her own husband. This clearly demonstrates the level of freedom women enjoyed in Vedic Arabia. Hind, who was the wife of Muhammad’s chief enemy Abu Sufyan, herself participated in the battlefield.

Hind opposed Muhammad tooth and nail. She followed her husband to the battlefield and when Abu Sufyan surrendered Mecca to Muhammad without a fight she caught hold of him in the marketplace and cried:

“KILL this fat greasy bladder of lard! What a rotten protector of the people”

When Muhammad tried to baptise her & asked her not to commit adultery , She spat out the bitter words:

“A free woman does not commit adultery!”

How proud this woman was of the rights and privileges that her Vedic society had invested to her!

It was Islam that extinguished the light of knowledge in Vedic Arabia. It is ironic that the man who brought about such darkness himself belonged to the Qurayshi Tribe of Mecca. The Qurayshi were particularly devoted to Allah (Durga) and the famous Shivling of the Kaaba Temple. The fact that the Shivling remains to this day in the Kaaba is solely due to the fact that it happened to be the Qurayshi tribe’s faceless Family Deity. As I mentioned before Muhammad’s name itself came from Mahadeva, which is another cognate for Lord Shiva. Muhammad’s own uncle, Umar-Bin-E-Hassham was a staunch Hindu and fervent devotee of Lord Shiva. He was a renowned poet and wrote many verses in praise of Shiva. One of these has survived on page 235 of Sair-Ul-Okul and reads as follows:

The man who may spend his life in sin
and irreligion or waste it in lechery and wrath
If at least he relent and return to
righteousness can he be saved?
If but once he worship Mahadeva with a pure
heart, he will attain the ultimate in spirituality.
Oh Lord Shiva exchange my entire life for but
a day’s sojourn in India where one attains salvation.
But one pilgrimage there secures for one all
merit and company of the truly great.

Muhammad’s uncle was one of the resident priests of the Shiv temple known as “Kaaba”. This sacred sanctum was decorated in an extremely rich and beautiful fashion. The Kaaba was astronomically oriented to face the winds. The minor axis of the rectangular base of the Kaaba was solistically aligned towards summer sunrise and winter sunset. It contained 360 statues of Vedic deities and was a shrine primarily associated with sun worship. The temple was an architectural representation of an interlocking set of theories covering virtually all creation and comprehending chemistry, physics, cosmology, meteorology and medicine. Each wall or corner of the Kaaba was associated with a specific region of the world. Thus this glorious Hindu temple was made to symbolically represent a microcosm of the universe. The Arabs would face east when praying. This representation of a microcosm demonstrated by the eight directional structure was derived from the Tantric pattern (Refer to Figure 1) of Hinduism. Right at the centre of the Kaaba was the octogonal pedestal of Brahma the creator. Today this very pedestal is called Maqam-E-Ibrahim by the Muslims.

A tantric pattern which defines the structure of Kaaba

However, more significant was the fact that the Kaaba was an extremely rich and ornate temple. On its walls hung innumerable gold plaques commemorating the winners of the annual poetry competition known as the Okaj fair. There were gold, silver and precious gems everywhere. It is no wonder that Muhammad armed with his facade of a new brand of religion set out to capture the immense wealth of the Vedic shrine of Mecca. After plundering the riches of the Kaaba, the wealth enabled him to systematically destroy all traces of the religion that threatened him so directly. It is an indisputable fact that money will make any low criminal devoutly religious in a hurry.

Despite the fact that Muhammad had to destroy all traces of Hinduism in order to make his “new religion” work, he knew that in order to fool people convincingly he would have to borrow from the Vedic culture that surrounded him. Being illiterate he picked out rituals and symbols that he didn’t understand and distorted and falsified them for his own ends. Here is a list of these distortions:

Muhammad destroyed all 360 idols, but even he could not summon the courage to completely obliterate the Shivling in the Kaaba. He entered the temple and kissed the black stone. The Shivling was so sacred that the man who so detested idol- worship ended up kissing the largest idol in the Kaaba. Later his followers in a fit of piety broke the Shivling and then out of remorse repatched it together again. Today it lies broken at seven places and held together by a silver band studded with silver nails, bearing the name “Sangey Aswad” which came from the Sanskrit Ashwet meaning non-white or black stone.
He jumbled up the Sanskrit words Nama and Yaja (which meant “bowing and worshipping” respectively) into a combination word Namaz and used that to describe his prescribed method of prayer.
Because the Vedic custom was to pray facing the East, in his hatred for all things Hindu, he directed his followers to pray facing only the west.
The method of circling around a shrine seven times in a clockwise direction is an ancient Vedic custom. Muhammad with his lack of originality decided that the 7 ritual perambulations should be retained but again in his hatred of all things Vedic decided the direction of the perambulations should be anti-clockwise.
With his phobia of all things Vedic, Muhammad knew that the greatest reminder and threat to his forced brand of religion were the beautiful Vedic idols of Arabic temples. Thus he destroyed every idol he could find and made idol worship the greatest crime for a Muslim. Such a man could never have comprehended how an abstract concept can be conveyed through a symbolic representation in the form of an image. Thus he made all image representation a sin as well.
Vedic religion is known for its ancient oral tradition. It is well known that the Vedic culture emphasized oral debate and expression far more than the written word. In adition the oral recitation of Vedic scriptures was always done in a lyrical fashion, utilizing music and thus reaching a height of expression. In fear of this musical tradition Muhammad decided to forbid Music.
All Arabic copies of the Koran have the mysterious figure 786 imprinted on them . No Arabic scholar has been able to determine the choice of this particular number as divine. It is an established fact that Muhammad was illiterate therefore it is obvious that he would not be able to differentiate numbers from letters. This “magical” number is none other than the Vedic holy letter “OM” written in Sanskrit (Refer to figure 2). Anyone who knows Sanskrit can try reading the symbol for “OM” backwards in the Arabic way and magically the numbers 786 will appear! Muslims in their ignorance simply do not realise that this special number is nothing more than the holiest of Vedic symbols misread. 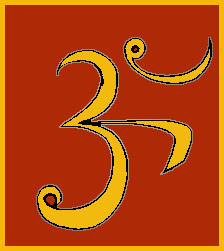 There are many such instances where the symbols and rituals of Vedic culture were completely distorted and falsified by Muhammad in his bid to “create” his brand new religion. However in his haste to deceive and because of his ignorance and illiteracy, thousands of Vedic symbols still remain. Although they have been distorted beyond imagination, they still remain as solemn reminders of Arabia’s glorious Vedic past. They can never be supressed.

In fact the rise of Islam put a full stop to all the previous knowledge of Arabia. The imperialistic message of Islam diverted all energies into raiding, looting and destruction. The incentive to learn and preserve the Vedic wisdom that had thrived in Arabia for so many centuries, was wiped out by the brutal pressure of Islam. Making easy money through loot and massacre was far more appealing than upholding the tenets of ancient knowledge. Gone were the schools, teachers, libraries, poets, artists, philosophers and scholars that had littered the Vedic landscape of Arabia like stars. Everyone had to become a raider if not from choice then for the sake of surviving the absolute intolerance of dissenters, that Islam preached. Thus was the light of learning extinguished in Arabia. All that remained was the Koran, the Kalma and the murderous hatred of anything Non-Muslim.

In my next article I will explore how the Arabs fought to keep the integrity and pride of their Vedic culture alive in the face of the violent, unjust and murderous destruction caused by the followers of Islam.